The 2014 report focuses on the idea of resilience as a corporate climate change strategy. Referring to the “capacity of a corporate institution or community to effectively respond to and recover from climate change impacts”, the goals of climate resilience overlap with those of business continuity and risk management efforts already in place within many organizations. In both situations, businesses work to identify the potential impacts of external factors – a changing climate, in the case of climate resilience – and prepare their infrastructure, processes, products and people to effectively handle these events. Over time, such anticipatory efforts will enable businesses to recover quickly following unforeseen events, including severe weather and its resulting impacts on supply chains and operations. Climate resilience initiatives should, however, expand upon classic risk management processes to consider and integrate the business opportunities arising from mitigating climate change, such as resource-use efficiencies, diversified – or localized – supply chains, differentiated products and reduced operational costs.

In order to highlight the importance of corporate climate resilience, Karen Clarke-Whistler – Chief Environment Officer of TD Bank Group – spoke at length in her keynote address about the financial ramifications of failing to act. In 2013, for example, Canadian insurers received more than USD 3 billion in loss claims associated with climate events, including an overwhelming number related to June 2013 flooding in Alberta, July 2013 storms & flash floods in Toronto, and winter ice storms on the East coast. The impacts of these storms were significant across all three areas of resilience: infrastructure, resource access and people; power lines, roads and buildings were damaged; supply chains were severely disrupted, resulting in inaccessible or delayed resources; and businesses lost productivity and profit as scores of employees were unable to get to work or work remotely.

It is important to emphasize that the severe weather of 2013, and the resulting impacts on the Canadian economy, should not be considered singular; to the contrary, research from the recent IPCC report demonstrates that dangerous weather events – droughts, flooding, storms and heat waves – are increasing in severity and frequency around the world. The same trend is being seen in Canada, where the average number of natural catastrophes – that is, events that displace people, result in injury or death, and cause property damage and general economic disruption – has effectively doubled since 1980 (Figure 1, below). In light of this, it is projected that Canadians will pay 5 billion per year for costs associated with severe weather by 2020, and an estimated 21 to 43 billion per year by 2050, if infrastructure and processes are not upgraded to eliminate vulnerabilities. 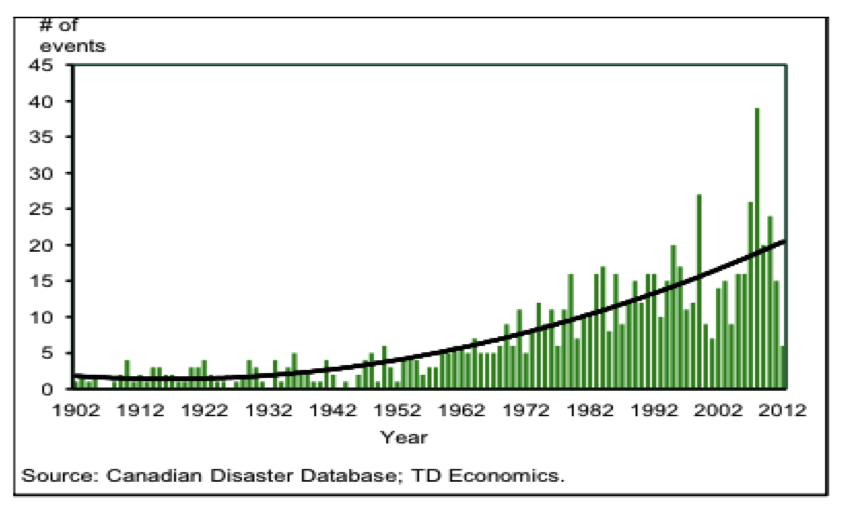 Luckily, the Canada 200 Climate Change Report shows that an increasing number of companies recognize the risks associated with climate change. In 2014, responding companies reported a total of 700 regulatory, physical and other risks from climate change, which is an increase of 41% over 2012 figures. Encouragingly, companies are identifying business opportunities at an even faster rate; total opportunities related to emissions mitigation and adaptation reported by responding companies rose 48% from 2012 figures. Opportunities identified in previous years are also coming to fruition; of the nearly 300 emissions mitigation initiatives introduced by Canadian companies, more than 80% qualify as ‘win-win’ investments by improving resilience simultaneously. Examples of such measures include building and process energy efficiency, low-carbon energy installations, changes to transportation processes and behavioral change.

The report also revealed two key areas of climate action where Canada and Canadian companies are falling short: policy and target setting. It shouldn’t come as a surprise that Canadian policy on climate change, particularly at the federal level, is lacking. Since Harper’s Conservative government formally withdrew from the Kyoto Protocol in December 2011, provincial governments have needed to fill the leadership void on climate policy. Despite the federal government’s refractory attitude, there have been several encouraging developments. In January 2012, Quebec became the first province to enact regulations for a cap-and-trade system on industrial GHG emissions, in a joint effort with California. Quebec also set one of the strongest North American reduction targets – 20% below 1990 levels by 2020. British Colombia has set a carbon tax that applies to three quarters of the province’s emissions and a reduction target to reduce GHG emissions by 12% below 1990 levels by 2020. In Ontario, the comprehensive Green Energy and Green Economy Acts are promoting clean-energy development; emissions in 2009 were 7% lower than in 1990, relatively on track for 15% reductions by 2020. 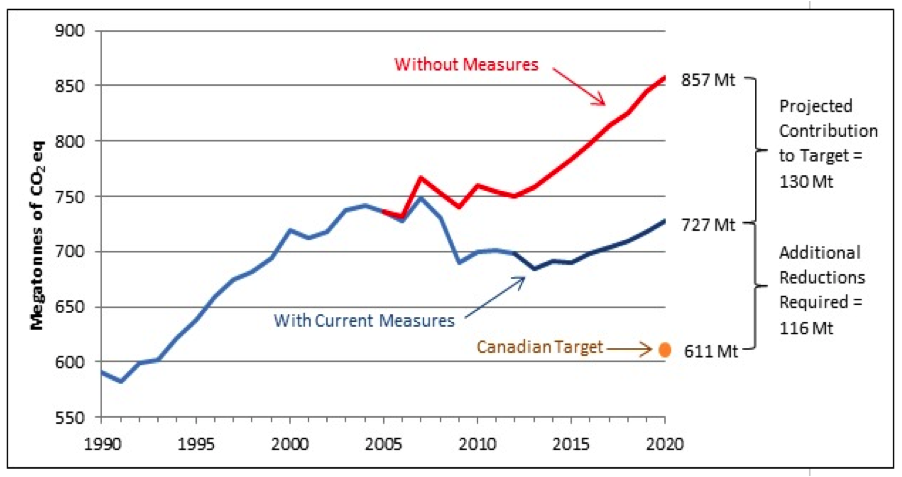 According to recent projections from Environment Canada, Canada is not on track to meet the target we submitted to the UNFCCC in 2010 of reducing national GHG emissions by 17% by 2020 from 2005 levels. Given that the targets listed above for Canada’s provincial leaders in climate policy – Quebec, Ontario and British Columbia – are all short of the recommended 25 – 40% reductions range put forth by climate scientists, this is to be expected. Using data from “Canada’s Emissions Trends 2014”, Figure 2 illustrates the fact that Canada’s annual GHG emissions will be 727 megatonnes of carbon dioxide equivalent (Mt CO2e) in 2020, which is 19% (116 Mt CO2e) higher than the target emissions level.

Lack of policy at the federal level, resulting in fragmented policy setting and a prolonged sluggishness towards national GHG targets, has evidently negatively impacted long-term mitigation planning within the Canadian business community. Only 56% of Canada 200 responders reported setting an emissions reductions target (either absolute or intensity), compared with 80% of companies in the Global 500. Interestingly, only 20% of targets set by Canadian businesses were long-term (defined as having a target year of 2020 or later). It is fair to speculate that the passivity of the Harper government regarding national target achievement and regulation of the emissions-intensive oil industry has caused hesitation and uncertainty on corporate target setting from Canada’s leading businesses. CDP data shows that Canadian responders are, on average, 5% behind the pace required to meet their reductions targets.

Figure 1 in the CDP’s Canada 200 2014 report uses Canada’s Emissions Trends 2013 data; Ecometrica chose to use the most recent data set, which was likely not available at the time of CDP report publication