Our turnover growth of 179 per cent in the last three years, to £2.25m, thundered us onto the leaderboard for the first time as the highest placed new entrant, behind only one other company – property developer Crucible Alba Group.

Scottish Business Insider has been publishing an annual listing of the fastest-growing Scottish companies for a number of years. Eligible companies had a turnover of over £250,000 three years ago and up to £8m in the latest financial year. They must also be profitable in the latest year.

Insider say that the Sprint100 leaderboard is created every year in order to reveal which Scottish companies could be the big players of tomorrow, as well as showing the importance of SMEs to the country’s economy. 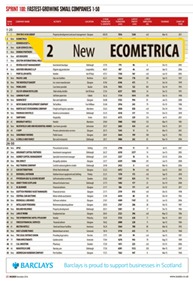 Our position on the Sprint100 ranking is the latest in a number of recent achievements for Ecometrica, alongside a multi-million pound MOU signed with the University of Edinburgh and a major enhancement to our Earth Observation (EO) platform that will see us bring together vast quantities of data collected by Europe’s Sentinel-1 satellite mission to help take the guesswork out of predicting future floods, crop yields, forest protection and water stewardship.

To read the full story and see the complete leaderboard, courtesy of Scottish Business Insider, you can either click the link below, or on the image to the right of this article >

7th December 2016 – Ecometrica is Scotland’s second fastest growing SME, according to Scottish Business Insider’s Sprint100 rankings for 2016. Our turnover growth of 179 per cent in the last three years, to £2.25m, thundered us onto the leaderboard for the first time as the highest placed new entrant, behind only […]